Home » A Work in Progress – Our Kitchen

Our kitchen is definitely the most used room in out house.  When we bought the house, the fact that it was so small wasn’t really an issue.  It was just my Better Half and I and so the small space was fine. 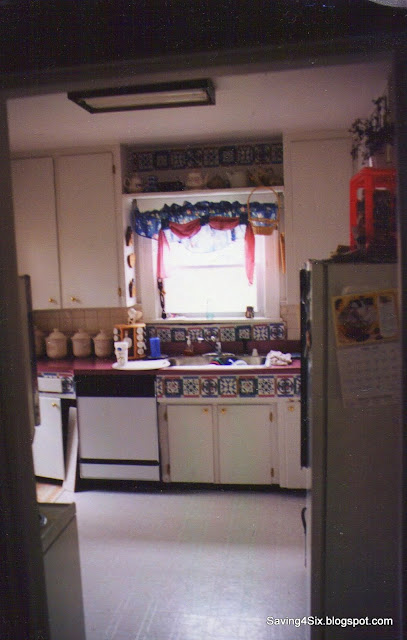 This is the kitchen shortly after we moved in 17 years ago.  At this point we had updated the counter top and added knobs to the cabinet doors.  We also installed the dishwasher.  I can’t seem to locate pictures from before these changes. 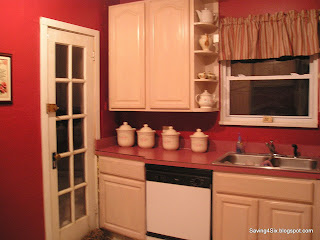 This is a better picture of our pink counter top 🙂  Here we had upgraded to new Kraftmaid cabinets.  We live near the factory that makes them and at one point they offered the scratch and dent or returned cabinets to the community for a fraction of the cost.  We paid less than $500 for all new cabinets.
Since our family quickly grew from two to six, space became an issue and we began looking for ways to make our home appear bigger and give us more space.  We started taking out walls…sounds simple…not so much.  We took out the wall between our living room and dining room first and saw that it was very do-able (that’s a future post).  So, we decided to try the wall between and dining room and kitchen. 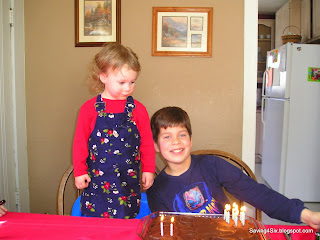 If you look past my darling daughter and son you will see the wall that we are taking out. 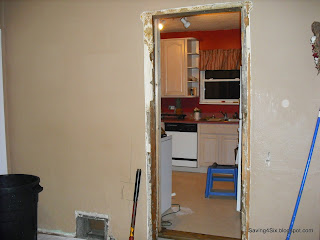 This is demolition day.  Our walls were plaster so we were prepared for a big mess.  We really had no idea how bad it was going to be!! 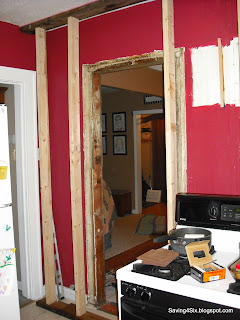 This is from the kitchen looking into the dining room. This wall is a load bearing wall so we had to replace the wall with a beam for support.  We built a temporary support wall until we could get the beam in place. 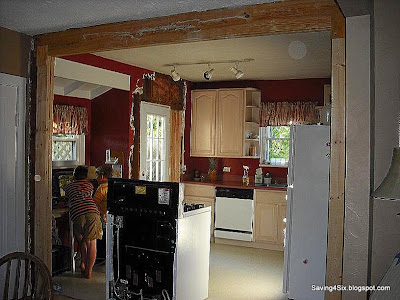 The beam is in place and that mess is cleaned.  The rest of the demolition and 3 months of chaos was well underway!! 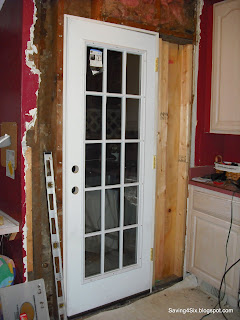 We wanted a bigger door and needed to move it toward the dining room to accommodate the new kitchen layout. (the refrigerator is going where that cabinet on the right is now) 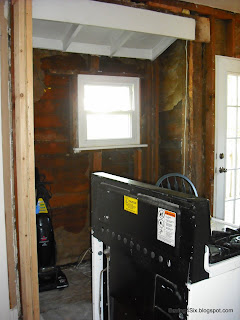 Next, we gutted the kitchen.  We wanted to put new insulation in the walls.  It was EXTREMELY drafty in this old house!   This particular wall was not insulated at all!  The new insulation has helped our heating and cooling costs drastically.
After demolition, things started to get better.  The “putting back together” was promising.  I began to think that I may be able to quit washing dishes in the tub! 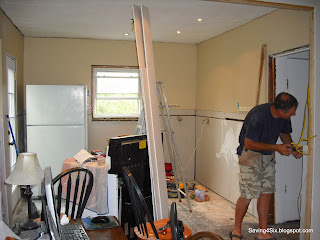 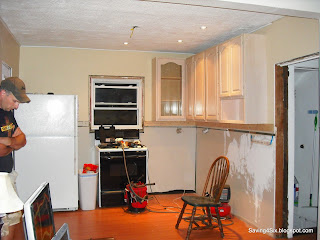 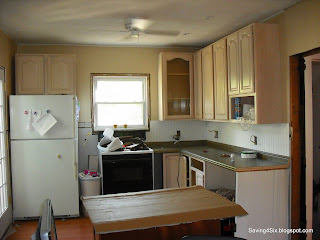 We reused our old cabinets but repositioned them for a more practical layout. 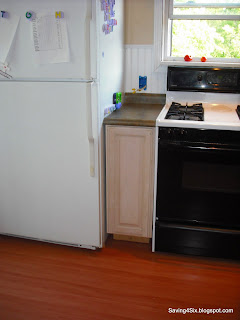 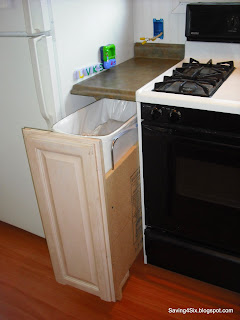 Repurposing parts from an old pantry, we neatly hid our trash in this DIY rolling, under the counter trash can. While putting cabinets in their new place we ended up with about a 5 inch gap between the stove and nearest cabinet so My Better Half made some little shelves out of plywood. I found these jars at a discount store and I store my flour and sugars in them. 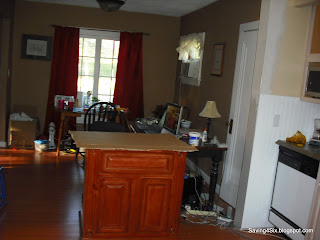 We installed bead board on the lower half of the kitchen walls and I LOVE IT!!  It looks so clean, classy, and country. 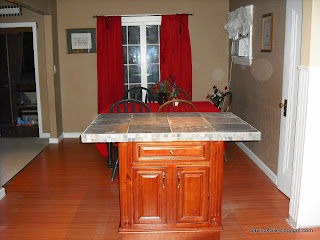 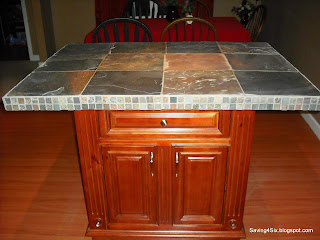 The island was a factory, mass-produced island.  The top is made of 12 slate tiles which I hand picked and laid myself.  It was super easy and I am thrilled with the look. 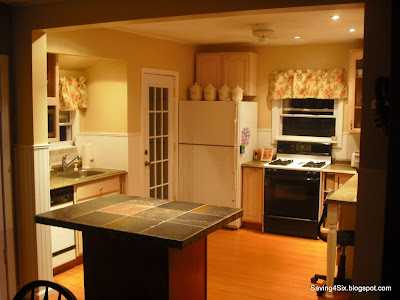 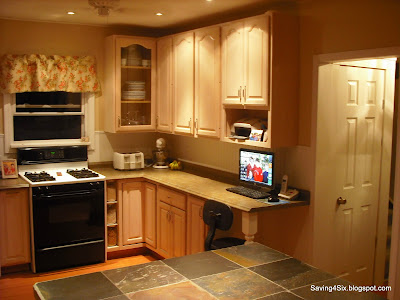 These are some of my recent changes:  Coffee Corner 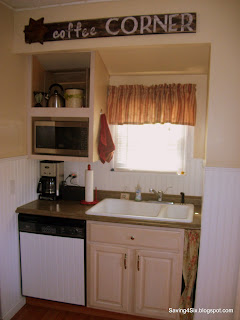 I love having everything right at my fingertips and I’m thrilled with the coffee corner sign. 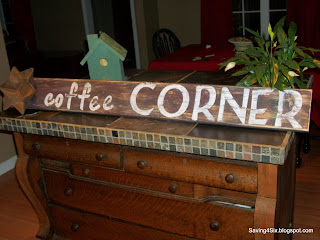 It adds a lot to the kitchen.
As you can see in this picture the update of my new ReStore Buffet turned Island, increased the character of the kitchen. 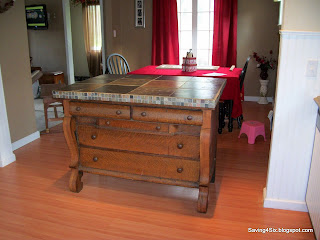 Don’t you just love it!?  So much better than the factory one!! 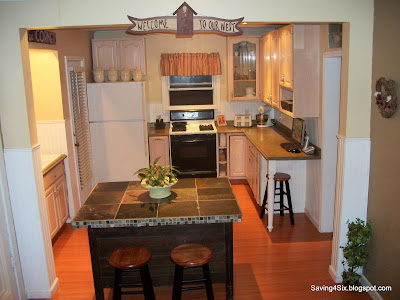 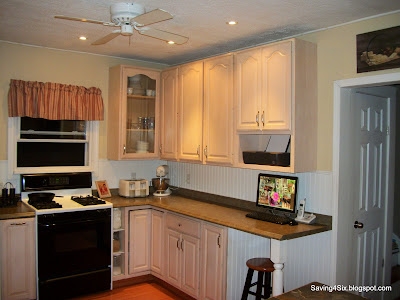 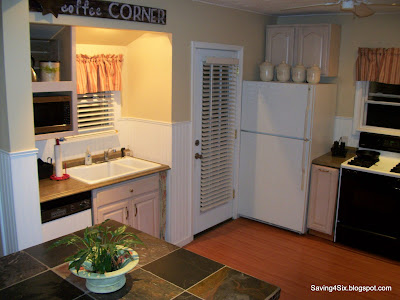 These are all the changes we’ve made over the past 17+ years.  What do you think?